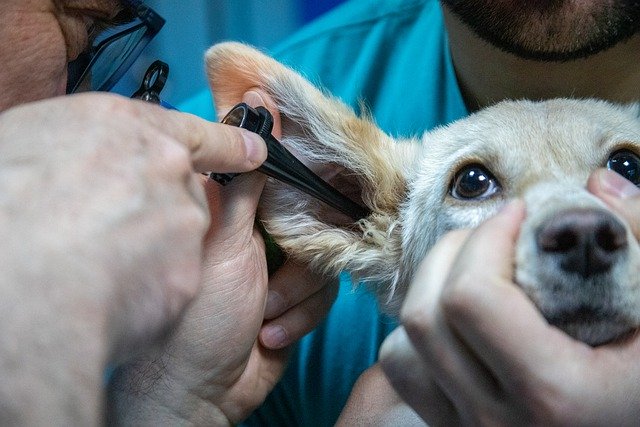 Is your dog scratching his or her ears a little too much? It may not seem like much of an issue until the action begins to injure the dog. Sometimes dogs can become very irritated by an allergy or infection or ear mites, to the extent where they scratch at their ears relentlessly until they bleed.

When this begins to happen, it is important that you quickly diagnose it and treat it. If left untreated, you may encourage further infection. If the scratching continues over a longe period, it can injure the ear canal.

Why your dog may be scratching ears

There are different reasons why your dog may be scratching relentlessly at its ears to the point of bleeding. One of the reasons is when a dog has ear mites. This is a pretty mild infection but it can get nasty and painful for the dog.

It is very contagious and can be spread between cats and dogs or between dogs. You may also see your dog pulling out its hair. This is painful for the dog and also for you as the owner to watch. You want to avoid this at all costs.

It is important to know how to distinguish between a regular scratch and excessive scratching that can lead up to bleeding ears or damaging the ears canal or the external ear.

Figure out the cause

Your dog’s itchy ears may be caused by various reasons. You must find out what is causing the scratching. This way you deal with the root and the entire action as well.

An eardrum rupture is one of the causes of your dog scratching incessantly. This can be due to a rapid change in atmospheric pressure, very loud noises, trauma, and foreign objects.

It could also rupture because of an infection to the middle ear or exposure to toxins. The eardrum is a very thin membrane that separates the middle and inner ear from the external ear. This membrane is deep inside your dog’s ear.

It carries out the task of transmitting sound to the middle ear. Take your dog to the vet if you think this could be the cause of his or her itchy ears. It will usually heal in three to six weeks if it is cared for properly and also depending on the severity of the rupture.

The rupturing of the eardrum can lead to more severe consequences like permanent neurological damage or hearing loss. This is why it is important to identify and treat the symptoms early on.

Your dog may be scratching because of dog bites. They are highly contagious which means that if your dog has been in contact with another animal that has dog mites, then it may also get them. The dog will then scratch relentlessly in a bid to get rid of the itch, but it just won’t go away.

And so the dog keeps scratching until it bleeds. These little parasites are very small, less than a millimeter long, and the bore into your dog’s skin. This inflames the skin and causes it to itch. They are pretty common in dogs and they cause several skin problems and hair loss.

Excessive scratching is one of the symptoms of dog mites. Watch out for the frequency and intensity with which your dog scratches. Your vet will always be the best person to diagnose whether or not your dog has mites and what course of action needs to be taken.

Treat the cause not the action

When you realize that your dog is scratching above the ordinary, you need to take the vet and get your dog treated. It is important that you treat the cause and not the action of scratching.

If you successfully get your dog to stop scratching but ignore what is causing the itch, then your actions may be futile. Get to the root of the issue. When you see your dog scratching incessantly, watch closely and try to find out what the cause may be.

Your vet will help you pinpoint the possible cause of the itchy ears. If your dog has dog mites and this is the cause for the itching, then you should be able to get rid of them by using an anti-parasitic wash.

These shampoos can rid your dog of any mites your dog may have. However, it is important to make sure that your vet approves of it first. You may also get a prescription for a medicinal way to get rid of dog mites.

If the itching is due to a ruptured eardrum, do not under any circumstances, try to treat it on your own. Go to the vet and get expert advice. Your dog’s sense of hearing is at stake. It is important that you follow the vet’s treatment plans to the letter.

Minimise the impact of the scratching

There are medicated topical creams that can do the job. Just make sure that you do so under your vet’s guidance. Your dog deserves a good night’s sleep. Help get rid of whatever is causing the itch.

Also, make it a habit to clean your dog’s ears regularly to get rid of anything that may be causing it to itch. There are also a couple of home remedies that can help soothe your dog’s ears, such as applying a warm compress to your dog’s ears.